› Store › Hollis, James › Tracking the Gods: The Movement of Archetypal Powers in Our Time

Tracking the Gods: The Movement of Archetypal Powers in Our Time

When Jung asked the question, “Where did the gods go when they left Olympus,” he answered, they left Olympus and entered the unconscious of the modern and became “disturbances.” When Jung talks of “the gods” he sees them as the personification of archetypal energies. Those forces are timeless and course through all of us, so when a god “dies” it means the energy has left the concept, practice, ritual, dogma, gone underground, and, incognito, appears elsewhere. How do we, then, track those energies, and where do they reappear in such contemporary forms as consumerism, seduction by electronics, sociopathies, and personal symptoms?

This online course will explore how today’s culture copes with, or finds surrogates for the primal powers of nature, however disguised they are in contemporary cultural expressions.

James Hollis, PhD was born in Springfield, Illinois, and graduated from Manchester University in 1962 and Drew University in 1967. He taught Humanities 26 years in various colleges and universities before retraining as a Jungian analyst at the Jung Institute of Zurich, Switzerland (1977-82). He is presently a licensed Jungian analyst in private practice in Washington, D.C. He served as Executive Director of the Jung Educational Center in Houston, Texas for many years, was Executive Director of the Jung Society of Washington until 2019, and now serves on the JSW Board of Directors. He is a retired Senior Training Analyst for the Inter-Regional Society of Jungian Analysts, was first Director of Training of the Philadelphia Jung Institute, and is Vice-President Emeritus of the Philemon Foundation. Additionally he is a Professor of Jungian Studies for Saybrook University of San Francisco/Houston. He has written a total of sixteen books, which have been translated into 19 languages. He lives with his wife Jill, an artist and retired therapist, in Washington, DC. Together they have three living children and eight grand-children. 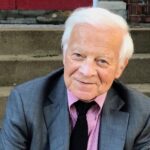