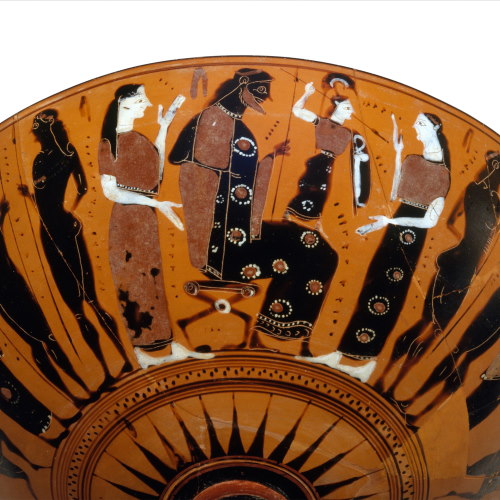 In Ovid's Metamorphoses, we are told of the encounter between the Greek Goddess Athena and an ordinary woman, Arachne, and we learn what fate awaits a woman who challenges patriarchal entitlement by daring to portray the transgressions of male gods against mortal women.

Are we still living within the myths of the heroic age of Greece, at that fateful time in western history when the Feminine, its sacred rites and values, were not just suppressed but destroyed? Was it then that the value and roles of living women were redefined in terms of their relationship to men?

This lecture is inspired by the work of my mentor, the late Joseph L. Henderson, MD, who was the only American invited by Jung to contribute to Man and His Symbols. Henderson's chapter was entitled "Ancient myths and modern man."

I will present original research pivoting on the myth of Athena and Arachne, weaving Ovid's tale with myths and insights from archeological and classical studies, as well as images from an alchemical manuscript studied by Dr. Henderson and myself. We shall ask, "How have modern men and women been affected by the negation of an independent basis for women's feminine values and identity, in their own right?"

The presentation will include a retelling of the Athena and Arachne myth from the point of view of Arachne. Participants will be invited to take the role of a mythological character and write from that character's point of view.

This program has cultural significance to all groups who have been negated in their worth by a more powerful group that identifies them as " other." Crises at this time in human history are in part a consequence of the dominance of a heroic warrior ideal and the need for power, paralleled by the loss of feminine values, eros, and connection to the natural world.

Recording: This class will be recorded and available for purchase at a later date.

1) Describe they way unconscious attitudes, revealed in myth, have been conveyed culturally through personal and cultural experience.

2) Apply the knowledge that patriarchal myths are embedded in the modern psyche: if conscious that our culture continues to convey attitudes negating the feminine, an individual can recognize that a lack of a solid sense of worth is not based on a strictly personal neurosis or conflict. If the emotional distress can be understood not to be a shameful personal failure, the individual can become more open to problem solving in creative ways.

Henderson, J. L. and Sherwood, D.N. (2003) Transformation of the Psyche: The Symbolic Alchemy of the Splendor Solis. Hove and New York: Routledge.

Dyane N. Sherwood, PhD is an analyst member of the C. G. Jung Institute of Chicago. She did her analytic training at the C. G. Jung Institute of San Francisco, where she was certified as both an Adult and as a Child and Adolescent Analyst. While in San Francisco, she was a frequent public speaker and teacher in the Analytical Training Program. She also served on the Board of Directors and edited Jung Journal: Culture and Psyche for ten years. She worked with Dr. Joseph Henderson as her primary Control Analyst, consulted with him after becoming an analyst, and co-authored with him, Transformation of the Psyche: The Symbolic Alchemy of the Splendor Solis. This book is based on three series of illuminated alchemical paintings showing a process of inner transformation, which is found in a Renaissance manuscript that is one of the Treasures of the British Library.

Prior to training as a therapist, she was a research neurobiologist, and she continues to read the literature and teach on the clinical relevance of contemporary neurobiology research. Her other interests include early childhood trauma and Native American wisdom and spirituality. Dr. Sherwood is also a Teaching Member of the International Society of Sandplay Therapy, and she includes sandplay therapy in her practice.

In 2010, Dr. Sherwood, moved to Oberlin, Ohio, where she has a private practice (dyanesherwood.com). In addition to her practice and teaching, Dr. Sherwood has recently started a small publishing company dedicated to publishing works in Analytical Psychology, with the additional imprints: Sandplay Editions and Dancing Raven Press, which specializes in shamanic and visionary works,memoir, and poetry (website: analyticalpsychologypress.com)