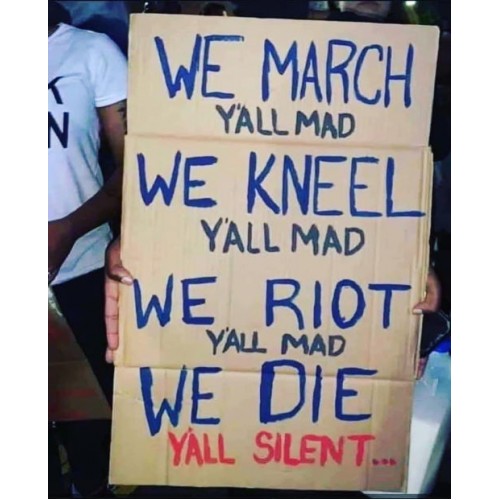 Revolution is not a one-time event.

On May 25, 2020, in the midst of a pandemic, white Americans finally came to see what black American activists, artists, ministers, and politicians have been pleading with us to understand for generations. For on that day, we witnessed a modern-day lynching: the video of a smug Minneapolis police officer, in broad daylight, callously pressing his knee into the neck of a 46-year-old black American named George Floyd during his arrest for allegedly using a counterfeit bill. The name “George Floyd,” as well as the time it took to kill him––“eight minutes and 46 seconds”––have joined with “Black Lives Matter” to become a clarion call for the reckoning of systemic racism in the United States, a societal structure built on the historic belief that the white European race is essentially best, that dark skin automatically identifies one as suspect, most likely dangerous, and definitely inferior. How do white Americans respond to this call?

In this six-week course, we will combine the study of systemic racism and white privilege, along with its archetypal underpinning of "caste," with opportunities to reflect on the various ways we participate in the status quo vs. adopting a stance as an "anti-racist." We will examine the archetypal, historical, and cultural roots of racism and draw on writings of Baldwin, Oluo, Kende, D’Angelo, Sue, Saad, Wilkerson, and Eddo-Lodge to invite a journey of self-discovery and experiential learning. Honest participation is both encouraged and expected.

Maximum Participants: The workshop is limited to 25 participants.

Minimum Participants: The workshop must have at least 10 registrants to run.

Live Interaction: This workshop will include live interaction with the instructors and other participants, with cameras and microphones activated to see and hear each other on Zoom.

Recording: This workshop will not be recorded.

1. Increase knowledge about the impact of systemic racism and reluctance to see our role in perpetuating inequity.

2. Explore historical and cultural aspects of racism in the United States and the underlying archetypal image of “caste,” the historical roots of ways humans seek to subjugate one group under another.

3. Identify any resistance to acknowledging how white supremacy has deep roots in U.S. society.

5. Engage in a forum for self-guided reflection and sharing about how one lives by becoming a “good ancestor” (Saad).

Paul Pendler is a board-certified clinical psychologist and an Assistant Professor in Psychiatry & Behavioral Sciences at Northwestern University Feinberg School of Medicine. He maintains a clinical practice with an emphasis on mood disorders and couples therapy. He developed and has run experiential workshops on racism throughout the United States for over 15 years. He is especially interested in overcoming the obstacles that prevent interpersonal dialogue with people of color, particularly after a perceived micro-aggression, an interest which led to the development of the Racism Root Kit©.