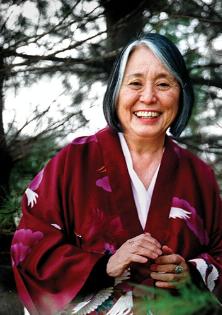 Jean Shinoda Bolen, MD, is a psychiatrist, Jungian analyst, and an internationally known author and speaker. She is the author of The Tao of Psychology, Goddesses in Everywoman, Gods in Everyman, Ring of Power, Crossing to Avalon, Close to the Bone, The Millionth Circle,
Goddesses in Older Women, Crones Don't Whine, Urgent Message from Mother, and Like a Tree with over eighty foreign translations. She is a Distinguished Life Fellow of the American Psychiatric Association and a former clinical professor of psychiatry at the University of California at San
Francisco, a past board member of the Ms. Foundation for Women and the
International Transpersonal Association. She was a recipient of the
Institute for Health and Healing's "Pioneers in Art, Science, and the
Soul of Healing Award", and is a Diplomate of the American Board of
Psychiatry and Neurology. She was in two acclaimed documentaries, the
Academy-Award winning anti-nuclear proliferation film Women—For America, For the World, and the Canadian Film Board's Goddess Remembered. The Millionth Circle Initiative (www.millionthcircle.org) was inspired by her book and led to her involvement at the UN. She is the initiator and the leading advocate for a UN 5th World Conference on Women (www.5wcw.org), which was supported by the Secretary General and the President of the General Assembly on March 8, 2012.

Jean Shinoda Bolen is a Distinguished Life Fellow of the American Psychiatric Association, and a past Chairperson of the Council of National Affairs of the APA, a Diplomate of the American Board of Psychiatry and Neurology, a Fellow of the American Academy of Psychoanalysis and Dynamic Psychiatry, a former member of the Board of Trustees of the American Orthopsychiatric Association, and a former Board member of the
International Transpersonal Association. She is an Analyst-member of the
C.G. Jung Institute of San Francisco and the International Association
for Analytical Psychology.  She is a past member of the Board of
Governors of the C.G. Jung Institute of San Francisco, and past
Chairperson of the Joint Certifying Board of the Northern and Southern
California Societies of Jungian Analysts. She has been a member of the
Board of Directors of the Ms. Foundation for Women.  She founded and
co-chaired Psychiatrists for ERA, which was a major influence within
psychiatry in the early 1980's, that evolved into the Association for
Women in Psychiatry.

We are working on implementing online and self-study courses so visitors must now have an account to checkout. This will allow courses and downloads to be saved in your account.